The greatness of a nation and its moral progress

Not to be morbid (this is figurative speaking) but when are Alborano and the goons going to fry?
Last edited by Mylute on Wed Feb 20, 2019 11:51 pm, edited 1 time in total.
"I'm here, free as the wind, fountain of extraordinary knowledge, splendidly corrupt, and eager to be of profitable service."
~ Peter Lorre 1904 - 1̶9̶6̶4̶ ∞
Top

From Facebook...Victoria et al have been busy.

Lucky Lotto.
You will soon break the bow if you keep it always stretched ~Faedus~
Top

Hal Parker was arrested and charged with animal cruelty and theft, per the NTWO.

Hope we see a new story by Mr. Paulick soon. Wheels of justice grind slowly - now go get the rest of these nasty critters.

Ray Paulick @raypaulick
50m50 minutes ago
A statement about the animal cruelty arrest of Hal Parker has been posted on Dina Alborano Twitter account saying her entity, Icareihelp, "parted ways" in August with Parker after an @NTWOorg expose. Screenshot of October post to Alborano's Twitter account suggests otherwise. 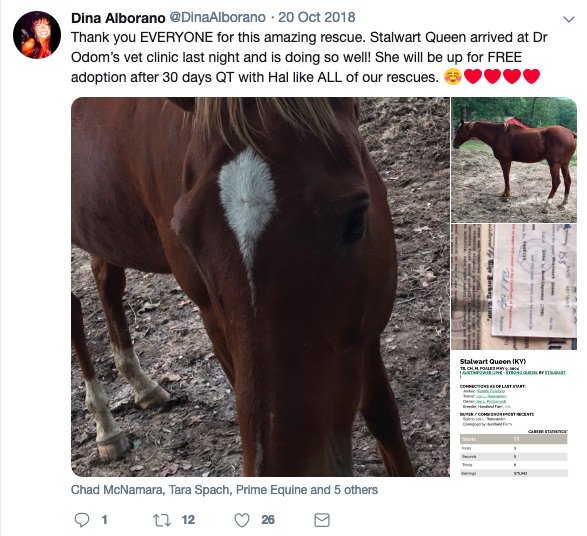 Don't know. Several of her replies to the "unfortunate" tweet are jabs. Someone posted a "you're next" gif.
"I'm here, free as the wind, fountain of extraordinary knowledge, splendidly corrupt, and eager to be of profitable service."
~ Peter Lorre 1904 - 1̶9̶6̶4̶ ∞
Top

...
Gates said it has been determined that Parker has boarded some 181 horses rescued from kill pens, and 55 of them can’t be accounted for.

The sheriff said other parts of the investigation are taking place outside of Louisiana.

According to a story published at NTWO.org, Parker is involved with an organization known as ICareIHelp operated by Dina Alborano of Trenton, New Jersey.

The National Thoroughbred Welfare Organization article, written by the group’s president, Victoria Keith, stated that many of the horses that ended up with Parker came from Thompson’s Horse Lot in Pitkin, Louisiana.

The article states that Alborano’s ICareIHelp was not a non-profit as stated on its website, and the organization chose Parker as its quarantine and care provider. It stated that Parker was a former employee of Stanley Brothers of Bastrop.

I hope she gets fined too. So sad that Steve Haskin was once associated with her. Glad he seems to have parted ways with her some time ago, although I did enjoy their podcasts.
Top

I certainly hope law enforcement will if there's complicity.
Top

I certainly hope law enforcement will if there's complicity.

This is the only appropriate response. It's really heart breaking.
Top

Yes, it really is heart-breaking. ^^^

Paulick's story by Natalie Voss below. She, like Maggie Moss and others, took a lot of shit over raising the issue through the Paulick Report last April. And a little humor to maybe help with the awfulness...
https://twitter.com/BadRacingTakes/stat ... 4007402497

The saga of a kill pen rescue in Louisiana continued this week with the arrest of one of its associates on multiple animal cruelty charges. Hal Parker, 60, of Haile, La., was taken into custody by the Union Parish Sheriff's Office on the morning of Feb. 19 and has been charged with one felony count of theft of livestock, two felony counts of aggravated cruelty to animals and two misdemeanor counts of simple cruelty to animals.

According to a spokeswoman of the Union Parish Sheriff's Office Tuesday afternoon, Parker was being held on a $250,000 bond.

Fair Grounds determined that Andre Colson, someone long-rumored to be a middleman, was the person who took the horses under false pretenses. They immediately went to the Racing Commission and got the following ruling against Andre Colson.

We thank and applaud the commitment by both Fair Grounds and the LA Racing Commission to solving this frustrating problem.

After seeing her Twitter account and profile, I have zero idea why anyone took her seriously to begin with.
Top

The article says Dina Alborano posted on her Facebook page that she is no longer accepting donations or rescuing horses.

A minor pet peeve: I'll be happy for the day that when an owner or trainer transitions a horse off the track through an appropriate organization created for that purpose we no longer say the horse was "rescued" or "saved." I like to reserve those terms for the horses in situations that puts their lives and welfare in great danger.

When prominent owner Rick Porter started the National Thoroughbred Welfare Organization (NTWO) in late February, 2017, his goal was nothing less than to solve every problem that exists in racing when it comes to the health, safety and welfare of the racehorse. That may be a bit naive and, obviously, is something no one can do overnight–even someone with the political clout and financial resources that Porter has.

But he has already started to deliver on his promises as the NTWO chose to begin its mission in Louisiana, which had a reputation for doing less than perhaps any other state when it came to keeping Thoroughbreds from going to slaughter or falling into the hands of what his key aid Victoria Keith calls “extortionists.” She is referring to people who set up Facebook pages, post photos of horses and say they will send them to slaughter unless the public pays a ransom a price to keep them from being killed. The price was always much more than the amount the horse would go for at auctions, where their only value was what they could sell for as horse meat.

More than two years later, Keith is still focused on Louisiana and says the situation there is now far better than before her arrival. The NTWO did not start operating in Louisiana until July and, according to Keith, it has rescued 118 horses off the track, mainly from Evangeline Downs and Delta Downs. She says she’s saved so many horses that her hay bill alone is $300 a day. Porter rented a farm in Lexington and the majority of the horses are shipped from Louisiana to Kentucky as they await placement in their ultimate homes.