Flanders wrote:I just watched a couple of the dam's race replays on Twinspires. She is dark bay/brown with a average size blaze and maybe some socks. Its pretty hard to tell with the quality but didn't see anything unusual and I was able to see both sides of her.

Since both parents were solid, it seems that she's the first with the mutation. It'll be interesting to see what happens if she's ever bred!
Top 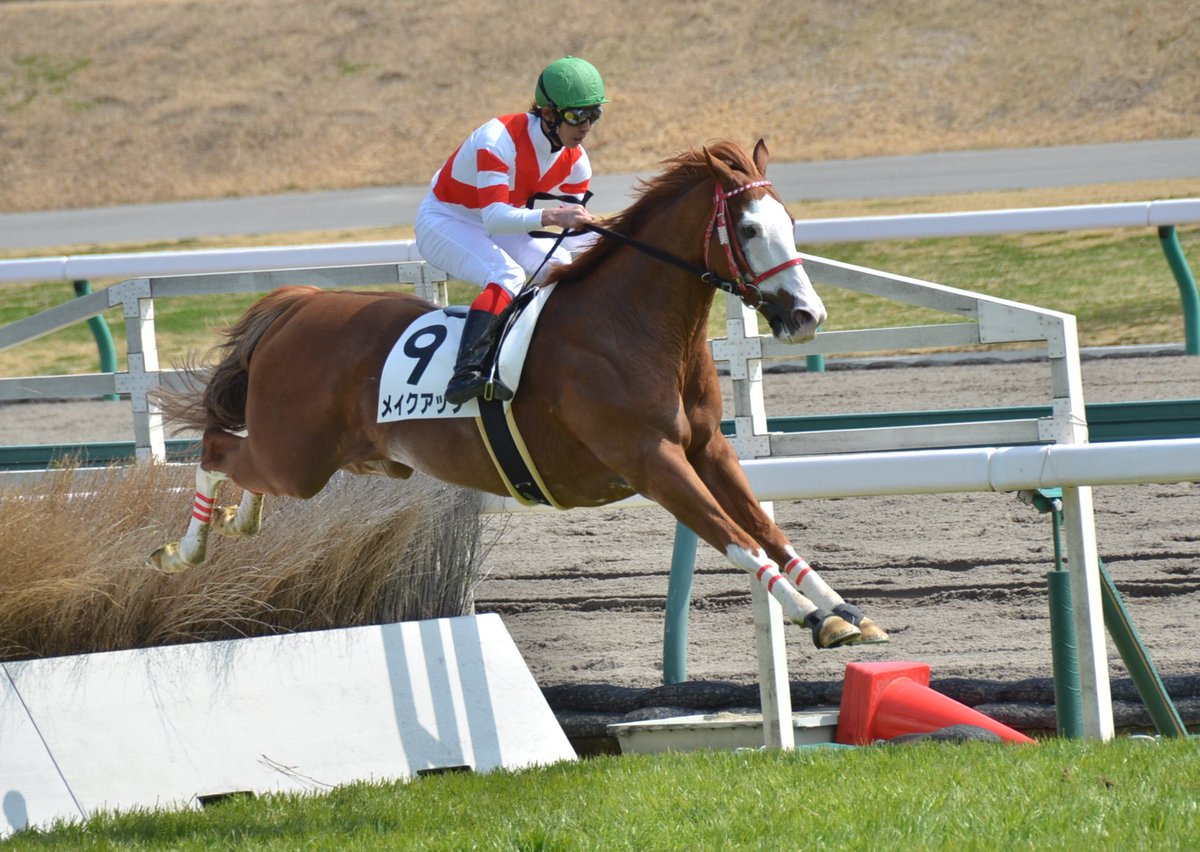 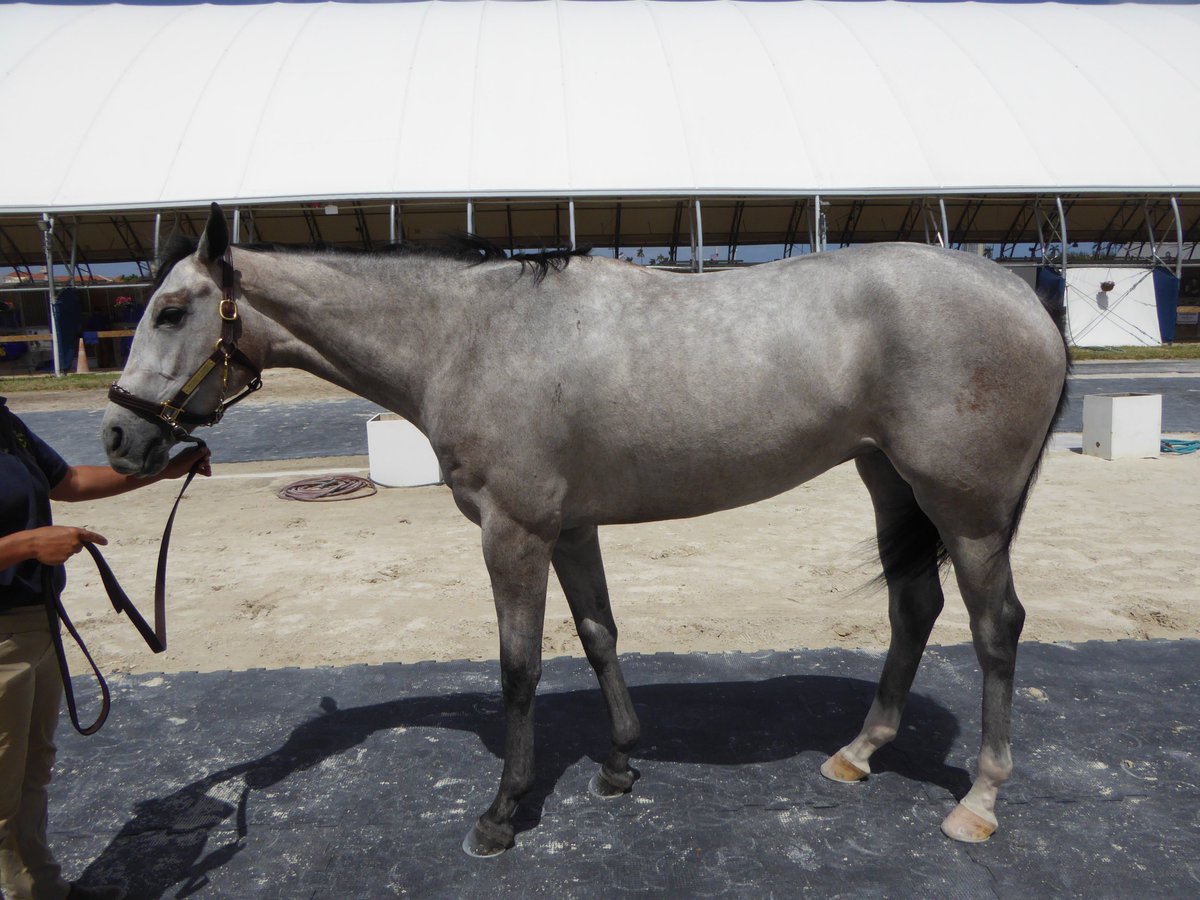 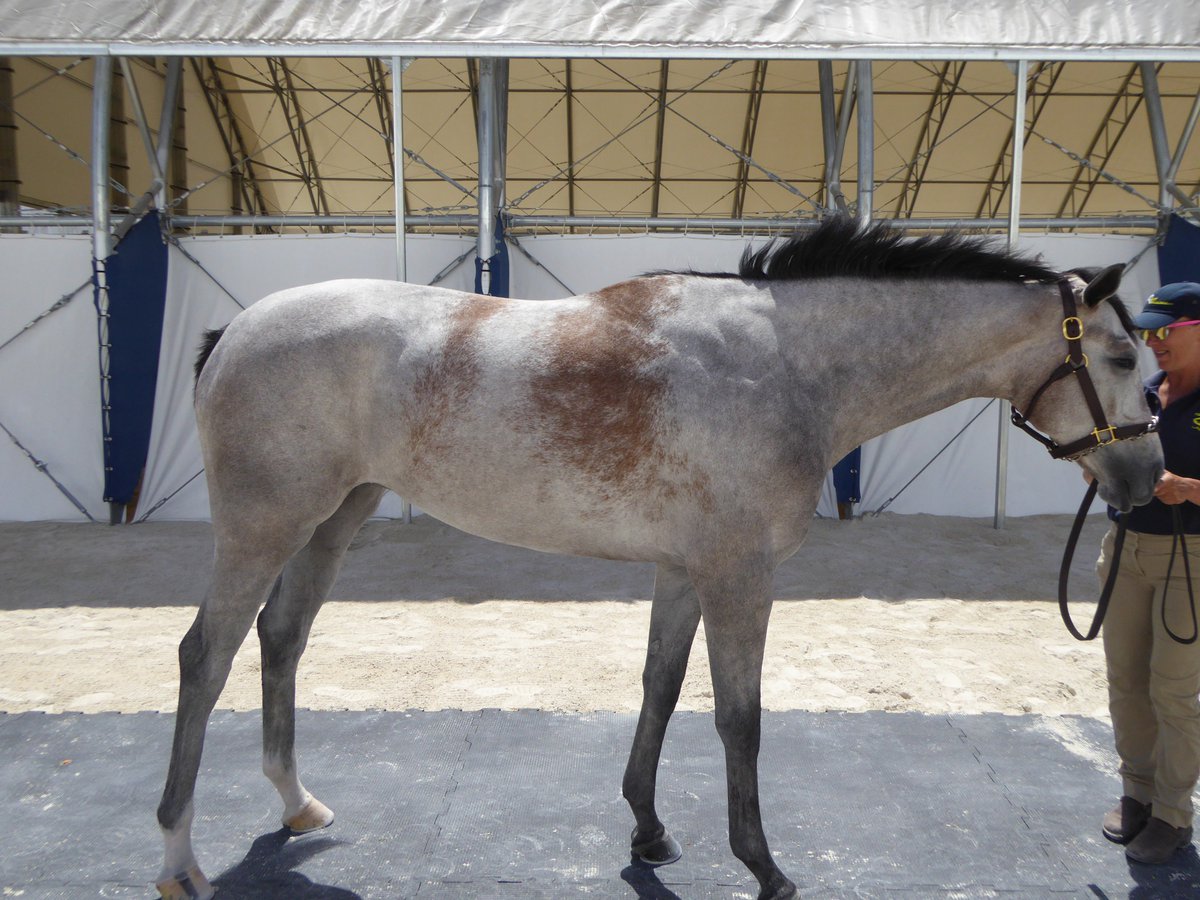 Bleeding/bloody shoulder! It has some mythical explanation in arabians. Very neat!
A filly named Ruffian...

Very pretty filly. Will that coloring last even as she continues to gray out?
Top

It should, as the patches are normally unaffected by the greying process.
Here's an example of an almost completely greyed out slightly fleabitten grey Arabian with a "bloody shoulder" type marking

Bedouin legend has it that all the horses with the bloody shoulder marking are descended from one mare...

The Legend of the Bloody Shouldered Arabian
As told to Carole Deegan by a friend, horse master and scholar of the Howettat tribe.

Once upon a time many years ago in the desert of Arabia, there was a Bedouin warrior who owned a very special Arabian mare - a mare he rode into battle and to whom he entrusted his life.

There was a very special relationship, a bond of trust, love and mutual respect. Either would have given his life for the other. In fact, their bond of trust was so strong that the mare often "read her master's thoughts," doing exactly what he needed at exactly the right time, allowing them to win many battles and to be the envy of all Bedouin tribes.

Years passed and one day in a fierce battle the master was severely wounded, falling across the neck and shoulder of his beloved war mare. Although her master was unconscious and she was many miles from home, the mare balanced him across her shoulder, carefully carrying him toward home. She traveled for days without food or water to return her master to his family.

When the courageous mare finally arrived at the encampment, she was exhausted and weak, and her master dead. As the family carefully removed the master's body, they saw that the mare's shoulder was heavily stained with his blood, leaving a distinct red mark on her shoulder. Although they had lost their leader, the Bedouin family was eternally grateful to the mare for delivering his body from the battle. They knew that the long journey had been difficult for the mare, and they were very concerned for her because she was heavily in foal.

As the days passed, the cherished mare received only the best food and care, and she was visited and admired not only by members of the master's tribe, but all the other tribes in the area.

Finally, the time of her foaling arrived, and there was great concern for the cherished war mare. But when the long-awaited foal was born, he was vigorous and healthy and of exceptional quality. He also bore the identical "bloody shoulder" that his mother had from her master's blood.

It was then that the Bedouin tribe realized that Allah had rewarded this mare and their tribe for their courage, loyalty and faith and that the "bloody shoulder" was a reminder of his favor.

Since that time, hundreds of years have passed, but once in a great while there is a mare of exceptional beauty, quality and courage who foals a very special foal graced by God with the "bloody shoulder." The Bedouins have continued to believe this is a sign of Allah's favor. Who are we to disagree?

Thanks for the reminder about the legend, Treve. I'm sure Victoria and Rick would agree that Joyful Victory is a mare of exceptional beauty, quality and courage.

An MdO out of a stakes-winning Tapit mare gets a bid of 'only' $335K? I think she looks pretty good, although the Bloody Shoulder photo is much more flattering than the first shot. Any weaknesses I'm missing?

Not surprised about the RNA.
Top

I've heard about him but first time I remember seeing him...not sure his breed. I think he's a stunning looking boy. Turn on sound.

WinStar Farm @WinStarFarm
5h5 hours ago
Our teaser stallion, Spots, is a true #legend in the breeding shed and he knows it!
Video: https://twitter.com/WinStarFarm/status/ ... 7592840192
Top

He looks like a typical leopard coat, I think he looks like he could be an Appaloosa Appendix, a sporthorse Appy or just a tall Appy

Unfortunately, the video embedded in that link won't play for me. That's the 3rd or 4th time in the last couple of days that's happened. Wonder if it has anything to do with all the Facebook fallout? Maybe people turning off the features that allow others to play videos?
Anyway, judging by the still photos, Spots is an Appaloosa. Or, if he's on the small side, maybe a Pony of the Americas?
Top

BaroqueAgain1 wrote:Unfortunately, the video embedded in that link won't play for me. That's the 3rd or 4th time in the last couple of days that's happened. Wonder if it has anything to do with all the Facebook fallout? Maybe people turning off the features that allow others to play videos?
Anyway, judging by the still photos, Spots is an Appaloosa. Or, if he's on the small side, maybe a Pony of the Americas?

He's wayyy too big to be a pony haha he towers over his handler! Not the same confo either. The link is a twitter video and it worked fine for me :O
A filly named Ruffian...

Yep I had a POA mare, crabby as all get out but oh how I loved that pony. <3

Check this guy out

A blue-eyed frame overo son of Get Stormy:

Hip #441 at the F/T Midlantic Sale is a white colt by Honorable Dillon. Would be great if any members
at the sale can get a picture of him. Thanks!
Top

The message I see is that you have to be logged in to FB to continue (I'm not on FB)... c'est la vie.

RuffiantoRags wrote:Hip #441 at the F/T Midlantic Sale is a white colt by Honorable Dillon. Would be great if any members
at the sale can get a picture of him. Thanks!

Barbara Livingston has a head shot of him on her twitter feed... hopefully somebody can get you the full body/confo shots!

This white Thoroughbred nut (me) is rooting for the 2-year-old Honorable Dillon-Princesspatseattle colt who's selling today at @FasigTiptonCo Timonium. Long before he was hip 441, he was an adorable foal and then an eye-catching yearling at @rockridgestud . 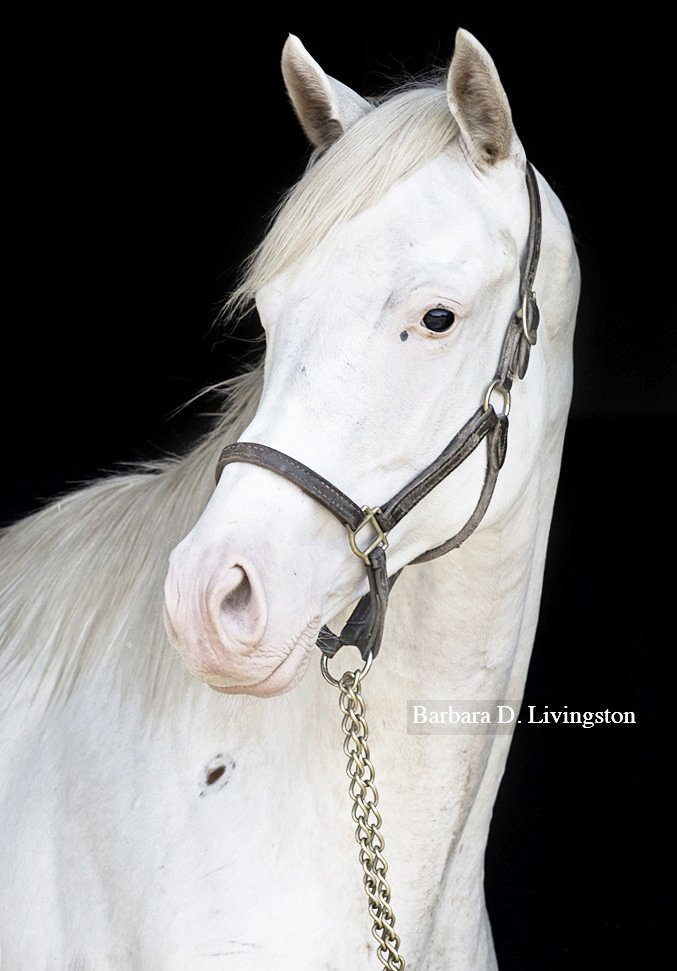