Change the word dog to horse.

A raccoon died on a Toronto street and animal control failed to pick it up in a timely manner, so this happened throughout the day...


DEAR ABBY: My calico cat, Rosie, seems to be fixated on my next-door neighbor Ron. Every morning Rosie grooms herself for an hour, then jumps in the window to watch for Ron to go for his morning run. She sits there until Ron comes out of his house. He exercises a lot and has kept himself in shape, while I admit I have let myself go. As soon as she sees him, Rosie starts purring.

I have to say that I resent this. I provide her with room and board and brush her regularly, but while I'm doing it, she watches the window intently and then bolts to her lookout post if Ron appears. I bought new window treatments, which she scratched her way through, damaging the blinds and shades. Filling her food dish strategically before Ron goes out doesn't deter her.

I love my cat, but I feel she is being unfaithful. What should I do?

DEAR LARRY: What a sad situation. Few things are more painful than feeling rejected by a love object. You didn't mention how sedentary you are, but it's possible that Rosie watches Ron because he is a moving object. Consider joining Ron on his runs and you may find Rosie is watching you, too. However, if that doesn't work, you may have to share the affections of your cat. Accept it.

How you know you're way too deep into horseracing...there's very little in here that made me go "huh?"

Beemie Awards
‏@BeemieAwards
We've lost some great things this year in 2015. This is the Beemie Awards In Memorium Video Tribute
https://www.youtube.com/watch?v=RZIUxVR5t5M
Top

^^Best thing I have read all day.
Top

^^Best thing I have read all day.

^Hahaha!! They can enjoy reading that while they open up all the "adult" toys people have been sending them!

My cat Cabot stood in as my expert consultant on my latest portrait today...

"Horse sense is the thing a horse has which keeps it from betting on people." - W. C. Fields</div>
Top

(srsly, can't look away because of firm conviction that SOMEBODY IS GOING TO POUNCE ANY SECOND NOW!)

I'm glad someone acknowledged it. I thought it was mesmerizing.

Sunday sports a little boring today? I've played around in this myself.

Remember when they wanted to know what "Lusty Vicar" meant

A horse named Indy Ana Jones totally stealing the Blue Grass would have been awesome. 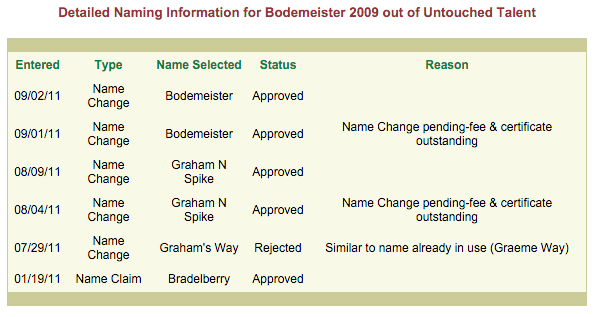 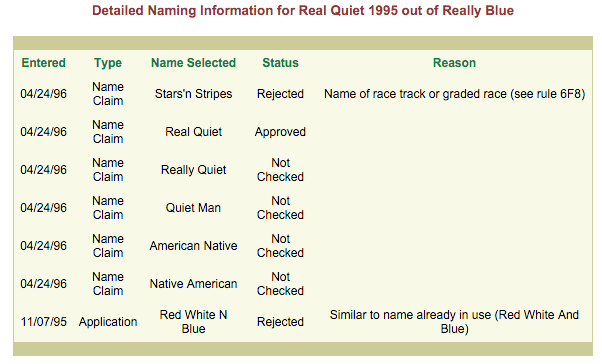 I wonder what its like to have a name you reserved get rejected at first.

They had a really odd list of possibilities for him @howarddschmidt

Check it out, Bayern was all set as Tahrir Square but they changed it.

How about Edd? No. Eddd? Nope. Edddd? Nope. WELL FINE WHAT ABOUT EDUARDO?!

Can you imagine how annoying the headlines would have been if "Heir Apparent" was going for the Triple Crown?

My god, his name was almost Droan Attack. #PepperRoani

I'd love to see the official explanation of what Effinex's name means.

I heard he named him after his ex-wife

She was at an airport somewhere, waiting at the terminal for a flight. She and several other people waiting could not help but overhear a heated argument between a woman and her sixteen-year old daughter. They were fighting about a boy that the girl wanted to date. The mother was totally against it.

The argument went on and on, and the girl said, "You can take me on this trip. You can even take away my cell phone. But when we get home, I'm going to go out with [that boy]!" The mother continued to disagree, and the argument went on, back and forth, with the entire population of the terminal listening and trying to be quiet and not be obviously listening. But it was obvious they were all listening, because everyone there burst into laughter when the girl shouted, "Of course he's a good person, Mama! Why do you think he's doing two hundred hours of community service?!"

~Miesque
Vice does not change its character by becoming fashionable.
Top

I thought this was worth a giggle:

President Nixon, President Clinton and President Obama are all standing before God, who is sitting on His throne, judging them.

Nixon says, "I'm sorry I lied to the American people."

Clinton says, "I'm sorry I got caught lying to the American people."

Obama says, "Hey, what are you doing on my throne?!"

~Miesque
Vice does not change its character by becoming fashionable.
Top

If you're going to take a shot at the POTUS, perhaps you should do it in the Political section?

Return to “Horsin' Around”