Gemini wrote: ↑
Mon Feb 25, 2019 12:30 am
Too bad about Maximus Mischief, but thank God they caught the problem before it became catastrophic.

It sounds like a tendon issue. Those don't become catastrophic.

All I was able to find was that MM had an undisclosed injury, so that's good to know.
Top 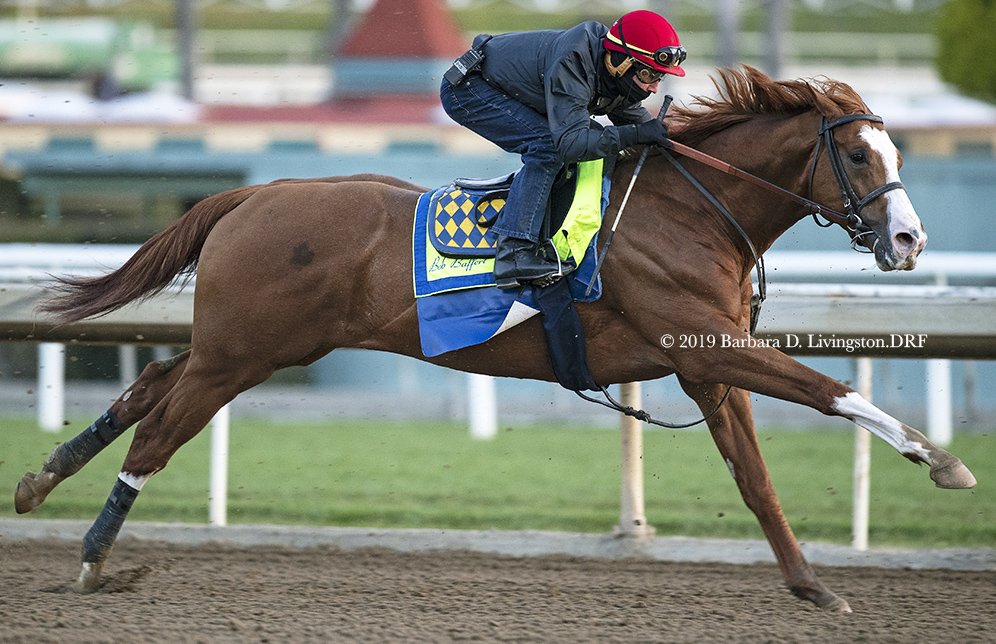 Grade 1 winner IMPROBABLE, with @DraydenV up for trainer Bob Baffert, worked 6 furlongs in 1:12.00 this morning at @santaanitapark .
Top

Other than her making her 3YO debut on Derby weekend, that story is inaccurate.
Top

If Game Winner, Improbable, and Instagrand are all there, the San Felipe next Saturday will be the prep race of the year.

I haven't hyped up my boy, Improbable, only because it's still a long way. So many CashCall/Los Al Futurity winners never make it at the Derby gate. Until I see him entering one in May is when I can get excited.

I know he's coming from a layoff but he can wire the field. The way Improbable moves is so fluid though. Slightly smaller than Justify but giant strides. I can't proclaim he's the Derby winner just yet. Anything can happen.

I'm not buying into Hidden Scroll until I see him duplicate that performance on a fast track. I never pay attention to the Louisiana preps. The Derby winner these days usually comes from Florida or California tied and then Arkansas.

Again, I've always said Baffert is the Belichick of horse trainers. It doesn't matter if some of his 3YO stock this year isn't as good as before. Baffert knows how to get things done. Never underestimate him in ANY year.

I remember when I first saw Justify in person at the Santa Anita Derby, I already knew he was going to win the Kentucky Derby. I didn't care about the Apollo curse, yadda yadda. I also knew the Team Baffert Dynasty would continue.

I'm aware Improbable is sired by City Zip and he has his share of doubts. Prove them all wrong. California Chrome was sired by Lucky Pulpit and he ended up winning three 10F races. He crushed Beholder in one of them.

There will always be doubts on every horse. Even Secretariat had doubts after he lost the Wood. It's about proving those doubters wrong. American Pharoah and Justify did.
Rock Hard Ten. Free House. Soul Of The Matter. Lit de Justice. Zenyatta. Justify. Cigar. Ghostzapper. Lava Man. Silver Charm.
Top

I ran marathons. I saw the Taj Mahal by Moonlight. I drove Highway 1 in a convertible. I petted Zenyatta.
Top

Just waiting for the announcement. Can’t believe they will both run in San Felipe although I hope they do.,Just unlikely before Ky Derby.
Top

With regards to making Derby lists and Jon White from Santa Anita via the LA Times newsletter.....

"I seriously contemplated dropping No. 9 Omaha Beach from my Top 10 this week. He reportedly missed a few days of training due to a quarter crack. But I decided to keep him on the Top 10 for the time being when learning that, despite the quarter crack, the plan is to run him in either the Rebel or Sunland Derby. Hall of Famer Richard Mandella is the trainer of Omaha Beach, a nine-length maiden winner on a sloppy track Feb. 2 at Santa Anita.”

If the quarter crack is true, no matter how minor, does anybody foresee Papa getting on a plane with a 3YO?
I think not.

No way, no how. Where’s Peace these days?
Top

Interesting what happens when a reporter actually speaks to the connections before repeating someone else's "work"....

No way, no how. Where’s Peace these days?

Hasn't raced since June and doesn't have any recent works.
Top

Other than her making her 3YO debut on Derby weekend, that story is inaccurate.

Starting to get the light of day. . . Thanks.
Top

Who goofed, I've got to know.
A) Stuart Riley/Racing Post
B) Nick Smith/Ascot Communications
C) Chad Brown
D) Other
I've found it easier to tear up tickets at 8/1 instead of 8/5.
Top

No way, no how. Where’s Peace these days?

Hasn't raced since June and doesn't have any recent works.

Thanks, I meant it rethorically.
Top

He looked good and finished very strong. Go Roadie go! Bob said his 1:10 work was “ sick”. Was non- committal about next race. His other horse Dessman was s vet scratch.
Top

The top three finishers in a pretty nice maiden race at Gulfstream- Identifier, Ranger Up, and High Amplitude- were all beaten 14+ lengths by Hidden Scroll last out.

I don't know what to expect later today, but I can't remember the last time I was so excited to watch a horse's second start.
Top
Post Reply
487 posts