OXO Equine's grade 2 winner Instagrand sustained a sesamoid fracture during the May 4 Pat Day Mile Stakes Presented by LG & E and KU (G3) at Churchill Downs and will undergo surgery, with a positive prognosis for a return to competition later in the year.

The 3-year-old son of Into Mischief , who cost OXO's Larry Best $1.2 million when bought out of The Gulfstream Sale, Fasig-Tipton's selected 2-year-olds in training sale in South Florida, was an inexplicable eighth in the Pat Day Mile on the Kentucky Derby Presented by Woodford Reserve (G1) undercard. The colt was initially sent to Taylor Made Farm before the veterinarians at Rood & Riddle Equine Hospital could examine him May 8.

Best said the colt was diagnosed with a left hind lateral apical sesamoid fracture and that surgery will be performed next week by Rood & Riddle's Dr. Alan Ruggles.

More: https://www.bloodhorse.com/horse-racing ... d-fracture
(P.S. FWIW, he did his training over the winter on the Santa Anita main track.)
Top

If there is a horse better bred for the Belmont I'd like to see him.
Top

(P.S. FWIW, he did his training over the winter on the Santa Anita main track.)

If I had a horse who trained or raced over that oft-sealed Santa Anita surface, I would be arranging for extensive (beyond x-rays) scans...like, yesterday.

Country House being treated at Rood and Riddle, will bypass Belmont, focus on summer/fall campaign, per Mott

Kentucky Derby winner Country House has been sent to the Rood and Riddle Equine Hospital near Lexington, Ky., to get a full workup after becoming ill earlier this week and being taken out of consideration for the Preakness Stakes, and will now certainly bypass the Belmont Stakes as well, his trainer, Bill Mott, said Friday.

“We sent him to the clinic to get thoroughly checked out,” Mott said. “He’ll have a tracheal wash, they’ll make sure he’s being treated with the proper antibiotics, make sure whatever bacteria is in there is being properly dealt with. He seems to be responding well. It’s not an emergency. We just wanted to get him over there and get him examined.”

Mott said Country House will focus on a summer and fall campaign once he’s ready to go back into training.

“My gut feeling was that he wasn’t going to make the Belmont, and now we know to put that out of our mind,” Mott said.

“He’s going to miss a week, or two weeks of training, and even if you put him back in training right away, it’s a rush, and we don’t have to rush. He’s a May foal. He’s accomplished a lot. There’s a lot of nice races the second half of the season.”

A full story will be posted soon at www.drf.com 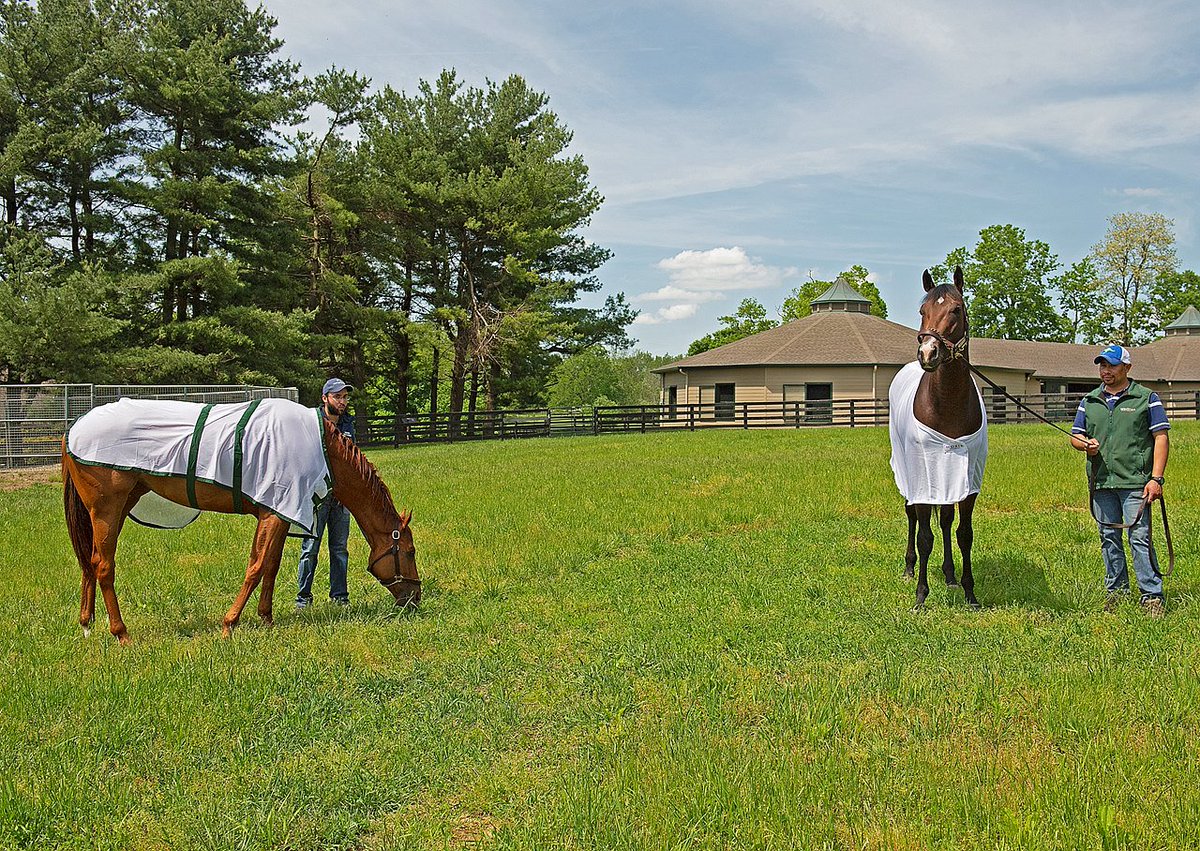 As the racing world debates the disqualification in the Kentucky Derby Presented by Woodford Reserve (G1), two horses who could have a major impact on the late summer/fall racing season are quietly moving forward with their rest and recovery at WinStar Farm.

Both Fox Hill Farm's 3-year-old Omaha Beach, the morning-line favorite in the Kentucky Derby, and Monomoy Girl are on the comeback trail at WinStar, putting medical issues behind them and generating optimism for their return to the races in the coming months.

"It's never about one or two races," said Victoria Keith, who works as the executive vice president of Fox Hill Farm for owner Rick Porter. "There's a long year ahead of us."

If all continues to go well for them at the farm near Versailles, Ky., Omaha Beach will leave for trainer Richard Mandella's barn May 18 and Monomoy Girl will be put under tack around June 1.

Omaha Beach won the Arkansas Derby (G1) and a division of the Rebel Stakes (G2) and was installed as an early 2-1 choice in the 145th Kentucky Derby, but he never made it to the starting gate. On May 1, three days before the opening leg of the Triple Crown, the Kentucky-bred son of War Front was scratched due to an entrapped epiglottis, which required throat surgery May 3.

All went well during the procedure, though there is still some swelling in the area. Some internet reports raised the possibility of Omaha Beach returning to Mandella's California barn this weekend, but both Porter and Keith confirmed that Omaha Beach is booked for travel on a May 18 flight to the West Coast, provided there are no setbacks.

"There was a misunderstanding about him leaving this week," Keith said. "We hope he makes the flight on the 18th. We'll see. He's healing. It's maybe just a bit slower than we would like. The swelling has not gone away, but it's moving in the right direction. We have to take things one step at a time."

If those plans come to fruition, Omaha Beach could be ready for a race by mid-July, timing that would line up for a start in either the July 20 betfair.com Haskell Invitational (G1) at Monmouth Park or the July 27 Jim Dandy Stakes (G2) at Saratoga Race Course, with the Aug. 24 Runhappy Travers Stakes (G1) at the Spa on the horizon.

"I looked at the stakes calendar on BloodHorse, and assuming we can get to the races in July or early August, there's enough grade 1s around, if he's the same horse," Porter said. "We would also consider the Jim Dandy. Saratoga is a spot that has some races that would fit him perfectly. But at this point, I don't want to count my chickens before they hatch."

Omaha Beach, the favorite for the Kentucky Derby prior to being scratched, will remain in Kentucky longer than expected due to irritation and inflammation following minor throat surgery for an entrapped epiglottis.

Trainer Richard Mandella said Wednesday that the postponed return to California is “no big deal” but that Omaha Beach would remain at WinStar Farm in Kentucky until his throat heals.

“I don’t think it’s healed enough, so I’m going to wait,” Mandella said. “Some horses react with swelling and inflammation, and some don’t. There’s no sense moving him, we’ll just let it heal.”

Anyone know how common it is to have post- surgery swelling and inflammation persist after this type of surgery? I was reading about a new technique where in addition to splitting the aryepiglottic folds, this tissue is surgically excised, dramatically reducing recurrence rates which can range from 5-40 % with the standard hooked bistoury technique. I wonder which type of surgery Omaha had? They said this new type of surgery is being done at Hagyard Medical.
Top

Squeaky wrote: ↑
Wed May 15, 2019 9:44 pm
Anyone know how common it is to have post- surgery swelling and inflammation persist after this type of surgery? I was reading about a new technique where in addition to splitting the aryepiglottic folds, this tissue is surgically excised, dramatically reducing recurrence rates which can range from 5-40 % with the standard hooked bistoury technique. I wonder which type of surgery Omaha had? They said this new type of surgery is being done at Hagyard Medical.

Fox Hill Farm posted a video of his actual surgery on Facebook. Go to their page and scroll down to May 3. They share an amazing amount of info and are a good follow.

I wasn't sure where to post this since it was a Preakness undercard but can I just say that Gladiator King has one heck of a heart. That horse races ALL THE TIME, and each time (now that he is in sprints) he gives 110%. I'm glad that they found his forte in sprinting.
Top

Grandson of Riskaverse by War Front is 2-for-2 and last defeated War of Will in the Summer Stakes (G1T).
Top

"I want to get him really, really right," Baffert said. "The goal's the Travers; run him one time before that."

Baffert said he will not have a runner in this year's Belmont Stakes.

Game Winner has not worked since the Derby. He was sent to Rood and Riddle Equine Hospital in Lexington, Ky. to be examined but he checked out clean. Baffert said Game Winner is currently at Churchill Downs, but would soon ship back to him in Southern California.

Meanwhile, trainer Gregg Sacco said that Joevia, winner of the Long Branch Stakes at Monmouth Park, is under consideration for the Belmont Stakes.

Every year leading up to the Derby there are opinions aplenty about the overall looks of this year's class. Some think it looks solid while others are skeptical.

Curious.....now that we have two classic legs in the books with the Belmont and Travers yet to be decided, what's your opinion now?

Obviously the biggest disappointment has to be the results of the Baffert barn when compared to early predictions but what about the rest of the group?

What say you? Excellent, Above average, Fair, Poor?
I've found it easier to tear up tickets at 8/1 instead of 8/5.
Top

I don't think you can fully grade a sophomore class until the season is finished.
"I'm here, free as the wind, fountain of extraordinary knowledge, splendidly corrupt, and eager to be of profitable service."
~ Peter Lorre 1904 - 1̶9̶6̶4̶ ∞
Top

Is Roadster back with Bob yet at SA?
Top

Leaning towards fair/poor.
I still think Omaha Beach may be the “head” of the class... whenever he makes it back.
Top