Following Saturday's catastrophic breakdown of Formal Dude, Santa Anita's 28th equine fatality since Dec. 26, the California Horse Racing Board has recommended that the track suspend the remaining days of its meet.

"Under current law, The California Horse Racing Board does not have the authority to suspend a race meet or remove race dates from a current race meet without the approval of the race track operator or without holding a public meeting with ten days public notice," the CHRB said in a prepared statement.

"The Chairman, Vice Chairman and the Executive Director recommended to Santa Anita management that they suspend racing for the seven remaining race days but that they allow horses to continue to train during that period. This would provide the industry more time to fully implement announced safety initiatives and perhaps additional ones.

"It is our understanding that Santa Anita management, after consultation with certain other industry stakeholders, believes that for a variety of reasons, the future of California racing is best served by continuing to race."

In Saturday's 10th race, post-time favorite Formal Dude pulled up and was vanned off the track after breaking down about 3/16ths of a mile from the finish line. With the winless horse running in fourth place, several lengths behind the leaders, jockey Tiago Pereira went to the whip four times in rapid succession — an apparent violation of California's whip policy — between the quarter-pole and the 3/16-pole.

CHRB spokesman Mike Marten confirmed that the horse was euthanized.

With pressure mounting from politicians, prosecutors and animal rights activists, Santa Anita has enacted a series of reforms aimed at improving its recent safety record. Yet despite those efforts, and a six-week span during which no horses died at Santa Anita, the track's problems have resumed and intensified.

In providing Santa Anita 10 days' notice, the CHRB may be able to shut down the track for the last three days of its current meet, which is scheduled to end on June 23. A decision on whether Santa Anita will retain the 2019 Breeders' Cup is expected at a Breeders' Cup board meeting on June 27.

"We have not explored options other than Churchill Downs," Breeders' Cup president Craig Fravel said Sunday.

"I also think it’s important that people realize that the initial rash of deaths and the deaths now are two separate things."

I agree with Ms. Terrell. Many (if not most) of the deaths that occurred earlier could be reasonably traced to the numerous times the track was sealed...without being harrowed/opened up in between.

Now, we're seeing some atypical injuries (including two pelvis, two shoulder, IIRC), and I hope some journalist/researcher out there is tracking the history of those horses. If damage began with a hard speed workout at a two-year-old sale, and/or the use of bisphosphonates in those horses, then Santa Anita shouldn't be blamed.
The business of stressing juveniles and the misuse of a potentially damaging drug for the sake of profit is an industry problem. I can blame that.
Maybe some industry insiders are happy that the MSM and the public are being distracted by the red herring of Lasix use, so that truly injurious practices don't have that spotlight on them.

Yes, BaroqueAgain1, if folks really want to learn and prevent and reduce fatalities in horse racing, they MUST define and differentiate the causes of current fatalities. I don't see enough of that as part of any of these articles and discussions.

God save us, there was another fatality today. Truffalino is a well-bred 3 year old filly, a Calumet homebred trained by Mandella. She worked over the Santa Anita dirt surface all winter, but her cause of death is apparent heart attack.

Times are dark at Santa Anita Park, which on Sunday declined a recommendation from the California Horse Racing Board to suspend racing for the final seven days of the meet in the wake of another equine fatality on Saturday.

Bad fortune continued Sunday when a 3-year-old filly collapsed and died of an apparent heart attack near the conclusion of an allowance turf race.

Truffalino, a 3-year-old filly trained by Richard Mandella, was pulled up inside the eighth pole. Moments after jockey Joe Talamo dismounted, Truffalino collapsed.

“They think it was a heart attack,” Mandella said. “I don’t know. I wish I had an answer.”

Truffalino did not appear to have sustained an injury to any limbs.

The incident adds fuel to the call for Santa Anita to suspend the remainder of its meet. Earlier in the day, the track declined.

A comprehensive article from the TDN. I really do hope they take a look at Churchill Downs' fatality rates before they make a decision to move the BC there.

According to the Times, Formal Dude died of a pelvis injury. Most equine fatalities happen when horses fracture one of their front legs. But the Times report says that of the five deaths at Santa Anita since May 17, four of them have been either shoulder or pelvis injuries.

Breeders’ Cup President Craig Fravel told the Courier Journal that the organization is exploring contingency plans and said that the only other track that has been mentioned as an alternate site is Churchill Downs. A Breeders’ Cup Board meeting is scheduled for June 27.

“I think it’s fair to say our board will have a full report from management on everything we know about the situation in California as well as injury rates at other racetracks and we’ll have to evaluate that situation and what our options are,” Fravel told the Courier Journal. “That’s really ultimately a board decision, so I have to defer to that process.” ...

Just as a dumb question, what does Santa Anita's surface have to do with a heart attack? Does PETA really believe the surface caused it? Does PETA have a new regimen for humans that could stop human heart attacks?
Just stay away from horse tracks! Never go near dirt again! No more heart attacks!
Just think, PETA could be on to something!
Then again, PETA could be loony as a bedbug.
Top 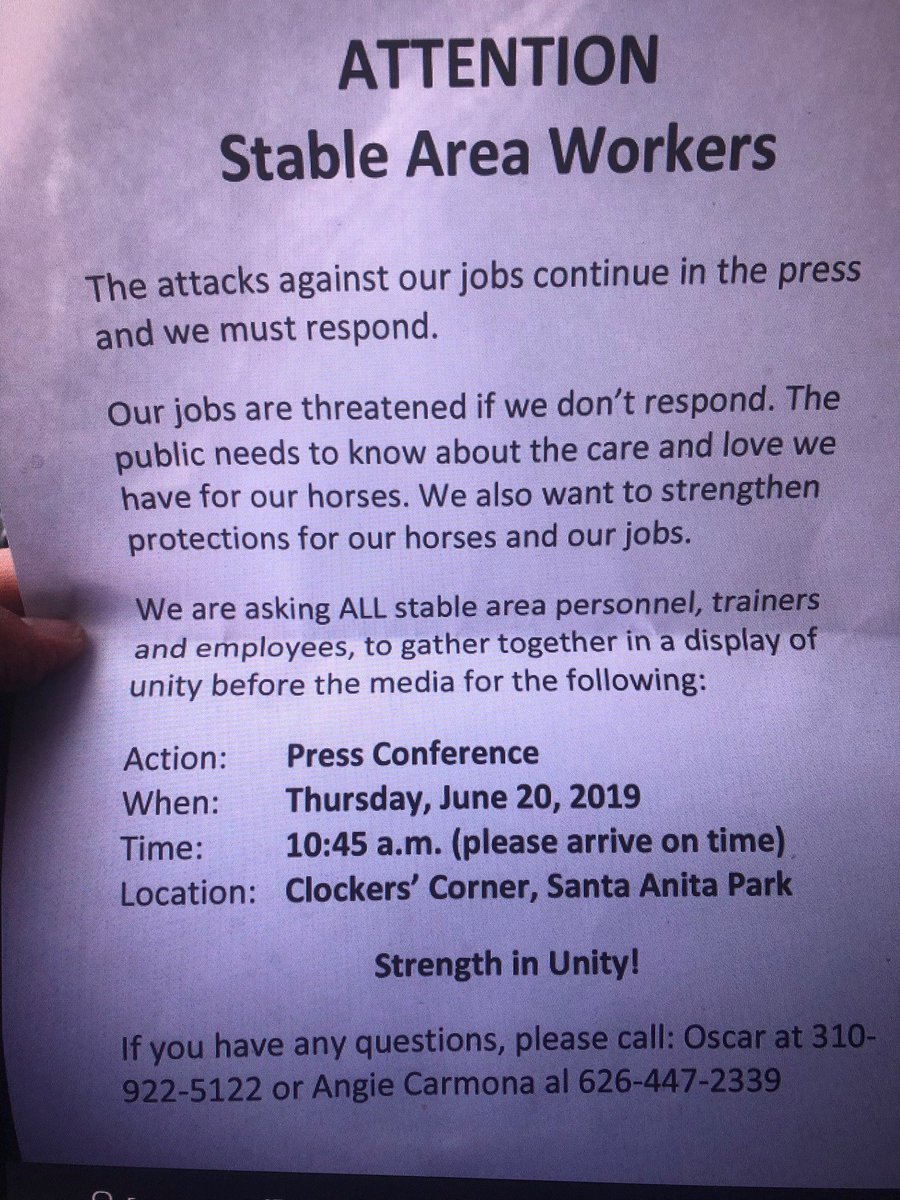 Will the media show up for such a positive display of love for the horses...or do they just show up when there's a death or chance of an injury on live TV?

https://www.paulickreport.com/news/the- ... VY.twitter
I've found it easier to tear up tickets at 8/1 instead of 8/5.
Top

Does Hollendorfer have a reputation for being too hard on his horses or for racing unsound horses? Or is he being made an example of by Santa Anita Powers-That-Be in order to deflect negative media/PETA attention?
Is he being used as a scapegoat?

If California racing already has a hard time filling races, I can only imagine that losing a big barn like Jerry's is going make things much, much worse.

I thought this was an interesting quote...

“We regret that Mr. Hollendorfer’s record in recent months at both Santa Anita and Golden Gate Fields has become increasingly challenging and does not match the level of safety and accountability we demand. Effective immediately, Mr. Hollendorfer is no longer welcome to stable, race or train his horses at any of our facilities.”

What record are they referring to? His 4 horses breaking down on the track? Also, does that mean his horses cant run in the Breeder's Cup?
Top

He has 19 violations with the CHRB, I think.
Top

I can't share details due to privacy policies, but I've worked with several of Hollendorfer's horses in a medical setting and I wasn't pleased with how they were handled. Some of them got very delayed and/or neglectful care. And it was Hollendorfer who believed that Songbird was fine until Mr Porter insisted that she go to Dr Bramlage, who immediately knew she was lame and after testing said "You're looking at a major catastrophe if you had continued with her."
I hate that the Stronach Group is doing this kind of stuff, but I'm ok with Hollendorfer going.
Top

Falinadin wrote: ↑
Sat Jun 22, 2019 10:03 pm
I can't share details due to privacy policies, but I've worked with several of Hollendorfer's horses in a medical setting and I wasn't pleased with how they were handled. Some of them got very delayed and/or neglectful care. And it was Hollendorfer who believed that Songbird was fine until Mr Porter insisted that she go to Dr Bramlage, who immediately knew she was lame and after testing said "You're looking at a major catastrophe if you had continued with her."

I hate that the Stronach Group is doing this kind of stuff, but I'm ok with Hollendorfer going.

There had to be something behind the saying "Jerry got to him/her".

I don't follow SoCal racing like I used to but I feel like every horse of his I liked had a limited amount of time to be good before he ruined them.

Who is next? There are bigger druggies than him.
Top

the thing with Songbird..... that made me sick. I too, was thankful that Mr Porter sent her to Dr Bramlage - and I was truly appalled with the list of things that he found wrong with that filly.

and yet, hollendorfer AND mike smith both said she was fine and sound before what was eventually to be her last race - that they both said she was ok before she ran that final time has always bothered me - and we find out later, that girl was most certainly not ok - and had not been ok for a while.

I felt so bad for Songbird - she was brave to still try so hard in those last couple of races. thank goodness she made it off the track safely and could finally be taken care of properly.

I don't believe Mr Porter ever gave hollendorfer another horse to train after Songbird. and that spoke volumes to me.
Top

makes me really worried abt Brill who i was expecting better things from...
Top

I think it's possible that Hollendorfer both deserves it AND is being scapegoated by the track to deflect from issues caused by their surface. It's not likey they can ban all of the open secrets on the backstretch, they have races to fill.

I wish it all felt like something more than futile attempts to plug the leaks on a sinking ship.
Top

I feel like you too, Tessa - I think its very possible that he deserves it and is being made a scapegoat - Ed Allred of Los Al voiced the scapegoat part in his recent statement - saying he would welcome hollendorfer to stable his horses and to run at Los Al (unless the CHRB forbids him from doing so) - but he used that exact word in his statement, 'scapegoat'.
Top

Falinadin wrote: ↑
Sat Jun 22, 2019 10:03 pm
I can't share details due to privacy policies, but I've worked with several of Hollendorfer's horses in a medical setting and I wasn't pleased with how they were handled. Some of them got very delayed and/or neglectful care. And it was Hollendorfer who believed that Songbird was fine until Mr Porter insisted that she go to Dr Bramlage, who immediately knew she was lame and after testing said "You're looking at a major catastrophe if you had continued with her."

I hate that the Stronach Group is doing this kind of stuff, but I'm ok with Hollendorfer going.

I am so grateful that Porter had the good sense to have his beloved filly examined by Dr.Bramlage- From what i recall Hollendorfer tried to convince Porter that the filly was just fine. That was it for Porter --he would never send another horse to Hollendorfer. You really have to wonder why Hollendorfer apparently persisted in trying to convince Porterthat Songbird was just fine. It really makes you wonder about his judgement of horseflesh.
Top
Post Reply
893 posts