It's early, but the saddling area for the first race has about 7 people standing along the rail watching, hmmm.
I've found it easier to tear up tickets at 8/1 instead of 8/5.
Top

Per TVG, track officials are in a meeting with state regulators about whether racing can proceed. They missed post time for R1.

ETA: the horses were drenched with sweat just walking in the saddling ring.
Top

They are going to race.
Top

Not a wise decision - makes me very nervous

Me too. Going to be a complete $hit-show if anything bad happens.
Top

ThreeMustangs wrote: ↑
Sat Jul 20, 2019 12:20 pm
Per TVG, track officials are in a meeting with state regulators about whether racing can proceed. They missed post time for R1.

ETA: the horses were drenched with sweat just walking in the saddling ring.

They all looked fine in the pre-race. Was that sweat or were they hosed down? (I just picked up the feed, so don't know).
Top

Todd Pletcher, smart enough to shed the coat and tie for the day, said he didn't foresee any problems as they've raced successfully in worse conditions in the past.
I've found it easier to tear up tickets at 8/1 instead of 8/5.
Top

Monmouth Park is going to run several races on its Saturday Haskell card while keeping an eye on the weather and how horses are handling the warm conditions. Management will then decide whether to continue with the program, according to a senior track official, who asked to remain anonymous because he was not authorized to discuss the matter.

The first race at Monmouth went off at 12:38 p.m., 38 minutes later than scheduled. The horses in race 1 were saddled, walked the ring and then were returned to the saddling stalls while a decision whether to race was made.

The official said a top ranking New Jersey politician had contacted track management and expressed concern over whether it was safe to race at Monmouth Park on Saturday.

There are about 75 protesters at the front gate to the track, who believe it is not safe to race today because of the heat and humidity. At noon, the temperature at Monmouth was 93 degrees, with 56-percent humidity. That translates to a 108 heat index. There is a breeze at the track, however, and conditions do seem suitable for racing.

Todd Pletcher, who was in the paddock prior to race 1, said he was comfortable to race his horses at Monmouth on Saturday. Pletcher’s runners include King for a Day in the $1 million Haskell and Coal Front in the $200,000 Monmouth Cup.

The Monmouth jockeys also are willing to ride.
I've found it easier to tear up tickets at 8/1 instead of 8/5.
Top

Stakes races only the rest of the day. 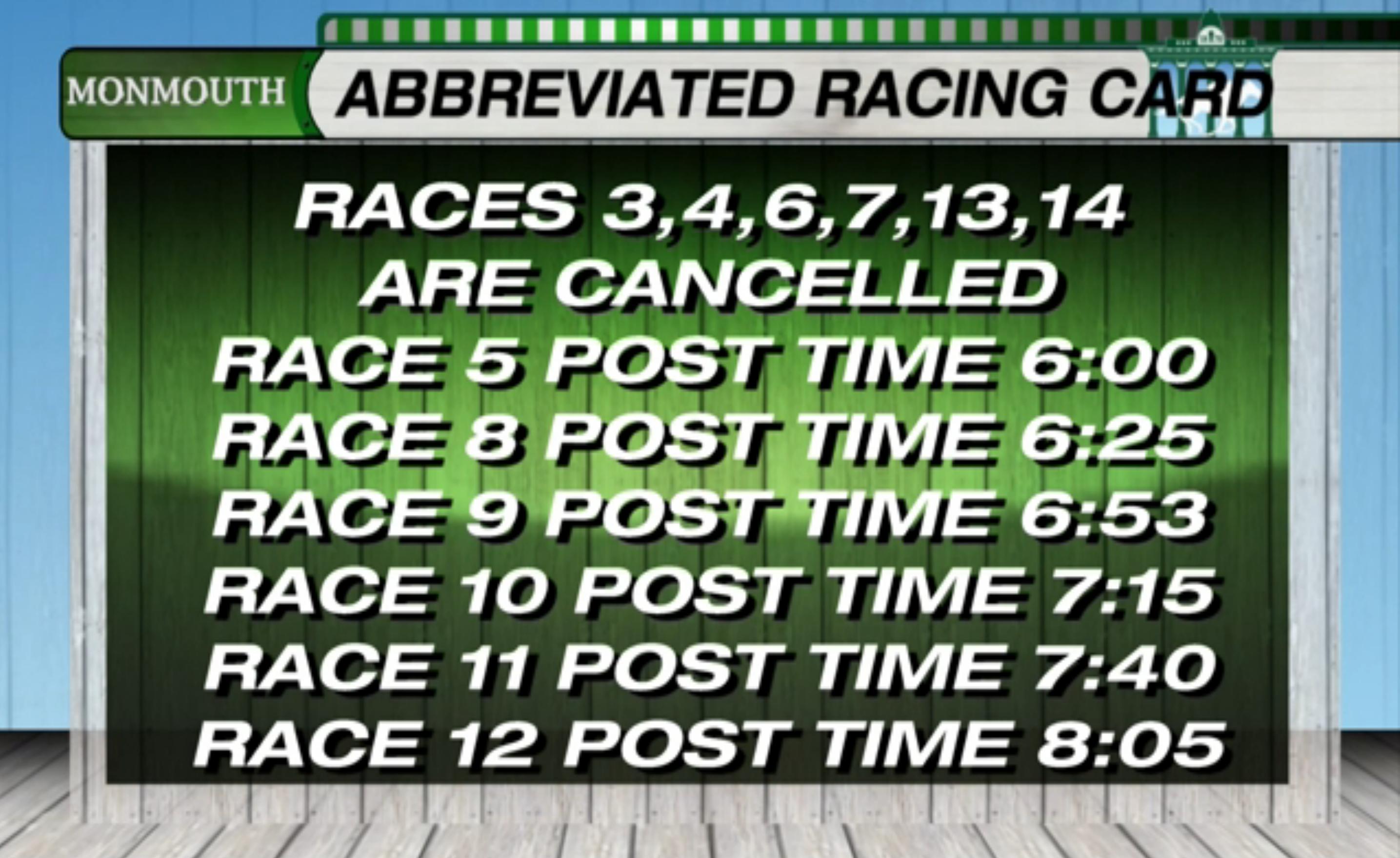 Who constitutes the political pressure?
Top

prides2259 wrote: ↑
Sat Jul 20, 2019 1:58 pm
Im in Upstate NY Its so Hot and Humid Today its Not even Funny
Personally I wish they had Postponed Just hope it All Goes Well
May GOD Watch Over they Horse s and Folk s

I went to get something out of my car the sweating was near instant. I'm on Long Island. It's brutal.

Why not just do this yesterday? Apparently there were protestors. I wonder if this becomes the new norm. PETA is a force of ignorance. I'm actually shocked how many people post libelous things using their full name on social media.
Top

Give a horse a shot of Lasix to dehydrate them and then run them in this weather. What a great idea.
Top

Just have to ask myself....

Did any owner scratch their horse because of the weather?

Did any trainer scratch their horse because of the weather?

Did any jockey refuse to ride because of the weather?

Those listed above seem to be some pretty strong percentages by those that have skin in the game. It can't be all about greed, there's a point where common sense would have kicked it, and apparently it did for those who were scheduled to run.
I've found it easier to tear up tickets at 8/1 instead of 8/5.
Top

So, this kills the live network broadcast on NBC, but NBC will now be streaming it on their app. TVG will have live coverage whenever it goes off - this from Horse Racing Nation...

Does anybody think the 3YO HOY is running today?
I've found it easier to tear up tickets at 8/1 instead of 8/5.
Top

EIPH is significantly increased by heat and humidity. What else are they supposed to do?

Besides not running, which would seem to be the prudent option.
Top

EIPH is significantly increased by heat and humidity. What else are they supposed to do?

Question about the timing of administering the shot.....how many hours pre-race does it happen?
Specifically, the horses running in the days 5th race, the delay was announced after the 2nd race, did they already get their meds, will they still be good to go or will they need a second dose?